This flight route was from San Carlos airport down to Reid-Hillview airport, just southeast of San Jose, and back. The flight was fun and the fact that my flying club affectionately calls this flight route “The Gauntlet” only made it more of a cool thing to do.

The challenge of The Gauntlet is that in just 30 miles you encounter boundaries and shelves of Bravo, Charlie, and Delta airspace and must talk to San Carlos tower, Palo Alto tower, Moffett tower, San Jose Tower, and finally Reid-Hillview tower (and all over again to get back home).

This flight certainly requires planning and advance preparation. I was sure to write down all frequencies on my knee board before arriving at the airport, as there was no way I wanted to scramble to find them on a chart or try to write down a frequency from fast talking air traffic control in flight. It was also important to discuss altitude considerations and expectations before departure. Getting oriented with Reid-Hillview airport in advance was helpful to make sure I was ready for an approach to parallel runways, a displaced threshold, runway length (decision: I will land and taxi back vs. attempt touch and go’s), a short taxiway between the runways, and noise abatement procedures.

Thankfully my flight over to RHV was pretty smooth, the controllers gave me the handoffs as expected and I didn’t have to worry about getting too close to the next boundary without talking to the correct controller. My instructor told me to expect to cross SJC at exactly mid-field, so you can see me head more south to make sure that crossing was spot on, but they ended up clearing me direct to RHV anyway. 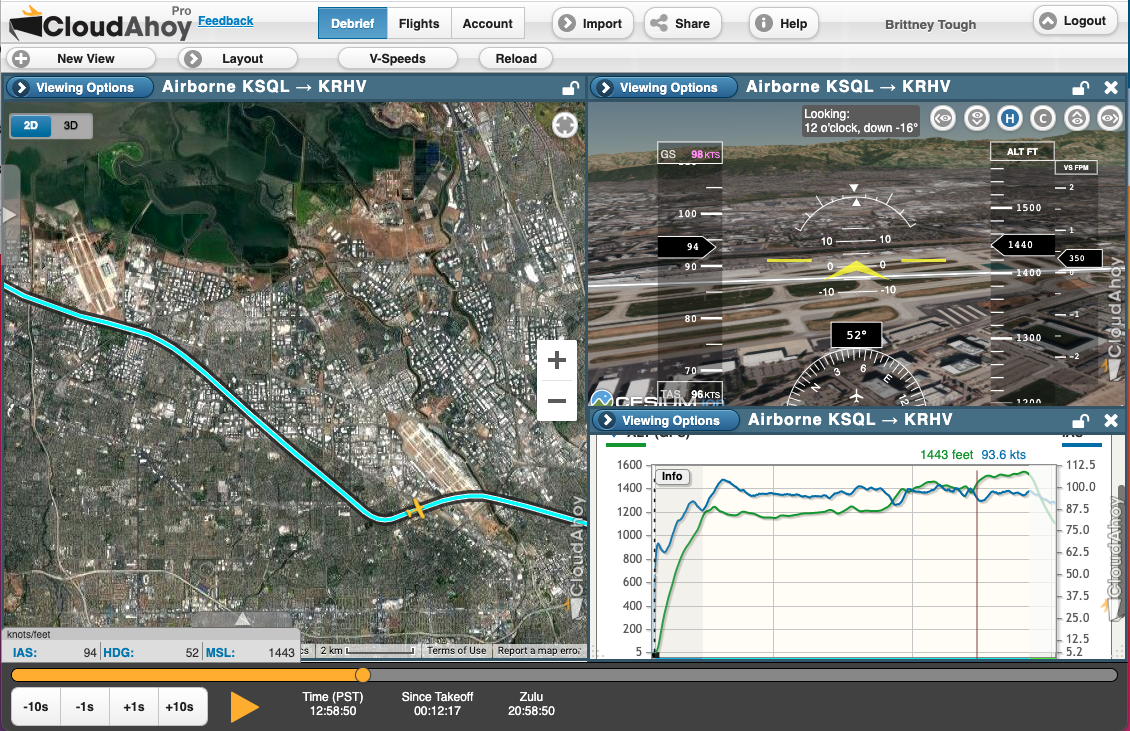 It has been a while since I have flown into an airport with parallel runways and I was obviously a bit intimidated by it and the parallel traffic, because you can see that I turn way too early for my final on the first landing, but I fixed it the next two times around. 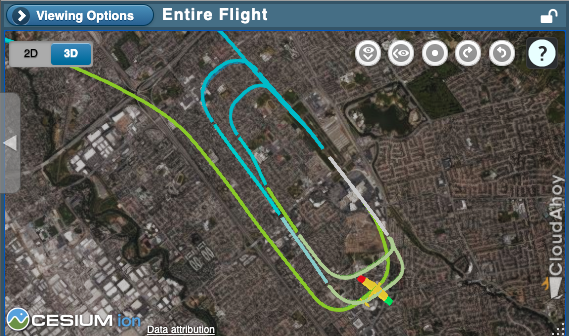 To complete my debrief, I used the view lock function to line up and compare the scores of my four landing approaches. I’m happy to see three of the four have similar total scores in the green. But, as I’ve seen in previous debriefs… I still always earn my lowest scores on centerline deviation. So, this is something I probably need to practice more and bring up to my instructor when I fly with her.

This flight is on the syllabus for the private pilot students at San Carlos Flight Center. When you complete the flight and all of the radio calls, you are awarded “The Gauntlet” pin of achievement. I think it is great that SCFC includes fun milestones like this in training. Even though I’m not in private pilot training, I found that this flight exercise was great for a former rusty pilot to fly to keep honing her skills and working that brain muscle.

For me, the flight had the perfect amount of challenge and total brain saturation, but I still felt like I was in the airplane the entire way and not letting it get ahead of me. During my debrief with my instructor, I said out loud, “That flight was really fun! I was on my toes the whole time and I loved it. It felt good to be challenged, but never overwhelmed into despair.” 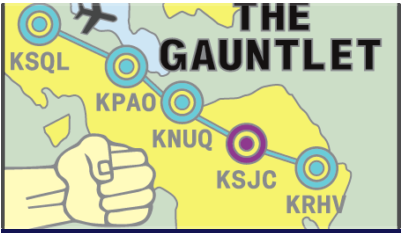