For pilots flying a Garmin G1000 or Garmin G3X-equipped aircraft – we have just released a significant addition to your debriefing arsenal: extended G1000 or G3X data displayed as CloudAhoy profiles. It allows you to focus on such things as your power settings, engine information, and navigation accuracy.

In what follows I describe G1000 profiles. G3X profiles are very similar.

I  used the G1000 data of a VFR flight which I recently flew from KPWM to KBED on a DA 40. The flight itself was uneventful, but still it’s interesting to view the rich data.
In this post I am going to share with you:
Examples of debriefing G1000 data
“How to” – viewing G1000 data

Example – Navigation, horizontal CDI:  this was a VFR flight and on the approach to landing I had to follow a Citation on the right base. Even though it was a visual approach, I loaded the ILS-29 approach into the G1000. The horizontal CDI profile shows the CDI deflection as I was approaching the localizer’s center beam, then overshooting it (oops) before intercepting the center line from the other side. 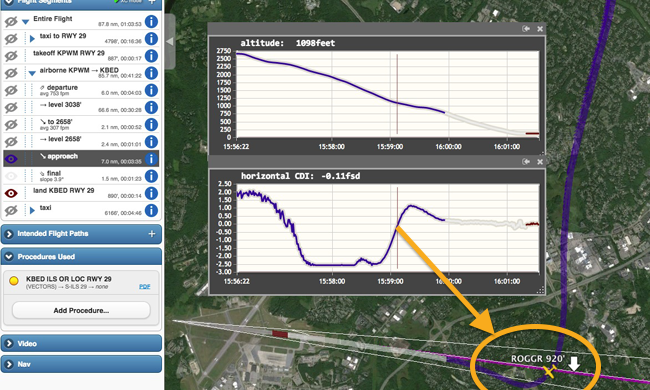 Example – Engine Data: I plotted the altitude, manifold pressure, RPM and CHT3 for the entire flight. Note the RPM=2000 during run-up, then set to max during the initial climb and during the final approach. 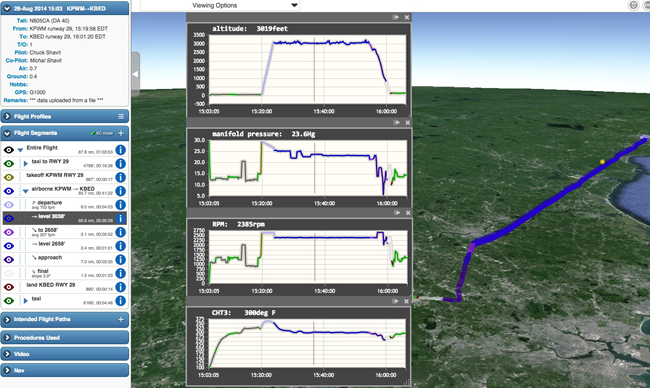 Example – Radio: in some cases it might be interesting to debrief the radio usage. The following screenshot shows my aircraft about 5 miles from Boston’s mode-C veil when I switched to Boston Approach 124.4 on the active COM1. COM2 at the time was tuned to KBED’s ATIS, 124.6.
Soon after, I switched COM2 to KBED’s tower 118.5, then after landing to KBED ground 121.7, and finally after I parked I called for fuel on 130.8.

Example – Altitude vs. OAT: Here I plotted the Altitude and the Outside Air Temperature profiles of the departure climb from KPWM to my cruise altitude of 3000′. Turned out the temperature dropped at a rate of 2.7°C per 1000′. 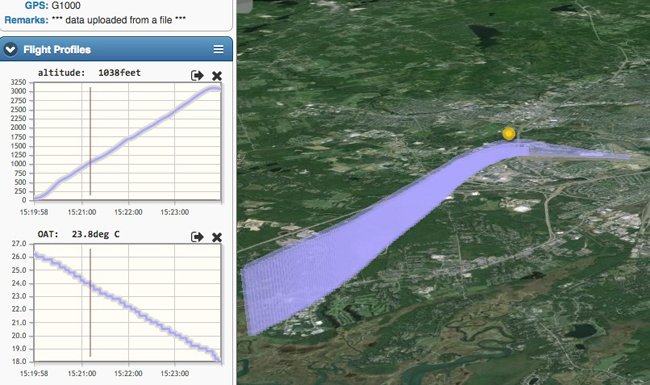 The combination of the rich flight data from the G1000’s avionics with the flexible profile display of CloudAhoy provides a powerful debriefing environment. You can display any number of profiles simultaneously and move their timelines in sync, or watch them change during animation. 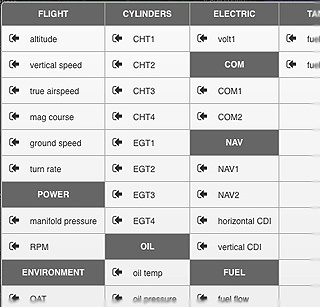 To display a profile, click (or tap) the profiles

menu icon in the Flight Profiles bar. You can select a standard profile (like altitude) as well as a G1000 profile.

We organized the data into groups. Read the list like you read classified ads in a newspaper: top to bottom and left to right.

As always, please let us know how this works for you. We would love to receive examples of your own debriefs using the G1000 or G3X.

One comment on “G1000 and G3X flight data with CloudAhoy profiles”