Our new release of CloudAhoy enables you to  specify your fixed-wing plane’s V-speeds.
The main benefit of doing so is for aircraft with “unusual” characteristics, such as vintage aircraft, “one-offs”, very fast planes, etc. In those cases you can enter the V-speeds, and CloudAhoy analysis will be more accurate.

Example
Last week Rob Waring was flying four traffic patterns in his 1939 Aeronca Chief, a relatively slow tail dragger. Not knowing the plane’s V-speeds, CloudAhoy calculated them, over-estimated Vs (stall speed) by 10 knots, and labeled most of the flight as an “unknown flight op” since parts of it were below stall speed – see 1 below. By specifying the Aeronca Chief’s V-speeds, CloudAhoy provided Rob with an accurate analysis – see 2 below. 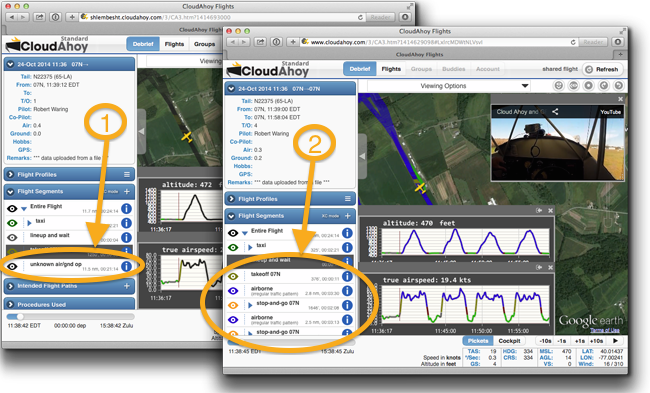 I had a lot of fun debriefing Rob’s flight, since he had embedded in it a nice cockpit video. If you have a few minutes, click this, turn on the audio, and enjoy 🙂

Until now, CloudAhoy estimated the V-speeds automatically from the flight envelop. This works well most of the time, but there are end-cases, such as very slow or very fast planes, in which CloudAhoy’s estimates might be off. The new feature enables you to increase CloudAhoy’s accuracy by explicitly providing the V-speeds.

How to enter the V-speeds
You can enter your plane’s V-speeds in the “My Aircraft” section of the Account tab. The example below shows how a user is overriding Vr. 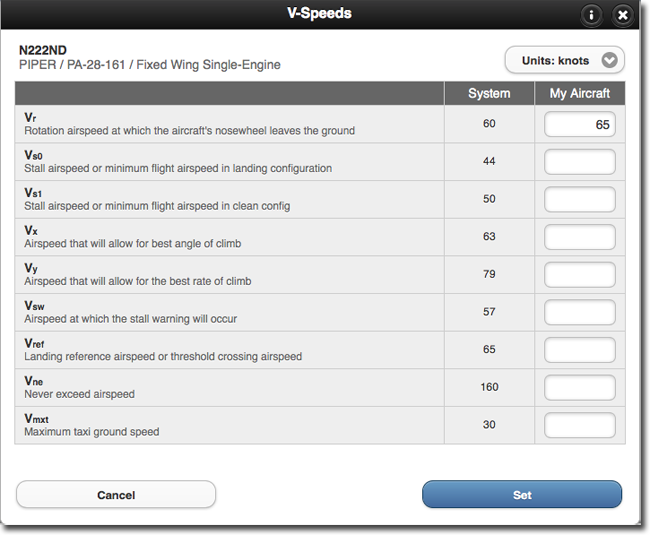 If you don’t enter V-speed numbers, CloudAhoy will typically analyze your flights correctly by either estimating the V-speeds, or by using the “system” V-speeds for your aircraft type.

There are two cases in which CloudAhoy’s analysis will benefit from your entering the V-speeds:

You can override any of the “system” V-speeds. Note that entering V-speeds affects only the analysis of your flights. It does not affect other pilots, even if they fly the same identical plane.

Let us know about your V-Speeds
If your plane type does not have a “system” V-speeds and you have entered standard V-speeds for it, please send us an email (dev@cloudahoy.com). It would help other pilots flying the same make/type.

As always, we welcome your feedback.