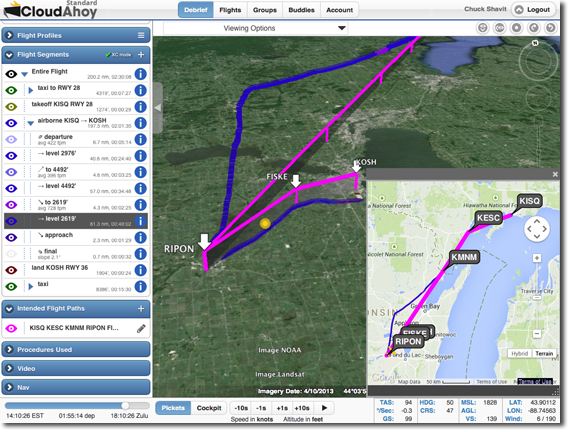 When you import a flight track from ForeFlight , we now also import and display ForeFlight’s route. This provides you with a valuable tool to debrief “planned vs. actual”. You don’t need to do anything special to get this route – it’s part of our import process.

The example above shows CloudAhoy displaying ForeFlight’s route in magenta. The actual VFR flight followed the planned route from KISQ till KNMN, then deviated from the route to go around weather, and finally joined the route from RIPON to KOSH.

The following Q+A will explain it in more details.

Q: Remind me – how do I import flight tracks recorded by ForeFlight?
A: See this.

Q: I entered a flight plan into ForeFlight before takeoff, then modified it in flight. Which will be displayed in CloudAhoy?
A: The last one. CloudAhoy imports the flight path as defined immediately before landing, i.e., the path including all the changes made in flight.

Q: How is this feature related to CloudAhoy’s Intended Flight tool?
A: When we import the route from ForeFlight, we automatically create an Intended Flight segment, colored in magenta. After the flight’s import, you can of course modify the route, change the color, or delete it altogether. And you can use the

symbol to hide or show it.

Q: I see labels with coordinates. What do they mean? 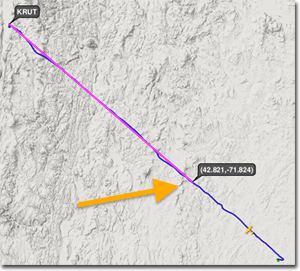 A: Your ForeFlight path probably did not start or end at a known fix. See the example on the right; the pilot flew for some time (the southeast section of the flight) before setting ForeFlight direct-to KRUT. As a result, the displayed magenta route starts at a coordinate where the direct-to was set.

As usual, please email questions or feedback to us at dev@CloudAhoy.com.