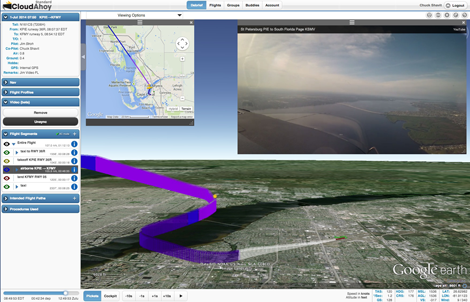 A growing number of pilots take videos of their flights. We received many requests to embed a flight’s video in the debrief – and we have developed this capability. This new feature is now in public beta. Thank you our pre-beta testers for your help!

Three steps to embed a video in CloudAhoy’s debrief:

Step 1: Upload the raw video to YouTube. It has to be raw, unedited.

Step 2: Add the video to your Flight

– Debrief the flight in CloudAhoy. 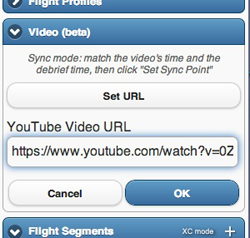 – Move either CloudAhoy’s timeline or the video’s, such that both show the same event,

– Click Set Sync Point. Now the video and CloudAhoy are in sync. You would typically set Cockpit mode during the sync process, and set the times so that the video and the cockpit view will show a similar picture.

Notes about the synchronization process
The sync process has to be performed only once. CloudAhoy will remember it the next time you debrief the flight, as well as when the flight is shared with someone.

If you started logging the flight before takeoff, CloudAhoy’s debrief automatically sets the time at the beginning of the takeoff roll, and to sync it is usually easy to position the video on that spot as well.

Tip: if the sync point is off by a few seconds, click Unsync, then use CloudAhoy’s +1s or -1s buttons as needed, then click Set Sync Point again.

Tip: play cockpit view so both CloudAhoy and the video show a similar picture, then use CloudAhoy’s Point of View buttons to look at different directions. You now have two view points of the same flight. Try for example to have cockpit view look at the aircraft’s 6 o’clock while the video shows the forward view.

This is a beta release of the video integration feature. Please let us know how it works for you – dev@CloudAhoy.com